The Real Life "Lord of the Flies"

This week, Karen and Georgia tell the story of the real life "Lord of the Flies.”

The Real Life "Lord of the Flies"

The Real Life "Lord of the Flies" Notes:

Photo by Zoltan Tasi on Unsplash

Photo by Tim Marshall on Unsplash

Humankind: A Hopeful History (by Rutger Bregman via publisher Little, Brown and Company)

STEVEN! in his dinosaur onesie courtesy of @StevenRayMorris

"Peter was the youngest son of Arthur Warner, once one of the richest and most powerful men in Australia. Back in the 1930s, Arthur ruled over a vast empire called Electronic Industries, which dominated the country’s radio market at the time. Peter was groomed to follow in his father’s footsteps. Instead, at the age of 17, he ran away to sea in search of adventure and spent the next few years sailing from Hong Kong to Stockholm, Shanghai to St Petersburg. When he finally returned five years later, the prodigal son proudly presented his father with a Swedish captain’s certificate. Unimpressed, Warner Sr demanded his son learn a useful profession. “What’s easiest?” Peter asked. “Accountancy,” Arthur lied.

Peter went to work for his father’s company, yet the sea still beckoned, and whenever he could he went to Tasmania, where he kept his own fishing fleet. It was this that brought him to Tonga in the winter of 1966. On the way home he took a little detour and that’s when he saw it: a minuscule island in the azure sea, ‘Ata. The island had been inhabited once, until one dark day in 1863, when a slave ship appeared on the horizon and sailed off with the natives. Since then, ‘Ata had been deserted – cursed and forgotten.

But Peter noticed something odd. Peering through his binoculars, he saw burned patches on the green cliffs. “In the tropics it’s unusual for fires to start spontaneously,” he told us, a half century later. Then he saw a boy. Naked. Hair down to his shoulders. This wild creature leaped from the cliffside and plunged into the water. Suddenly more boys followed, screaming at the top of their lungs. It didn’t take long for the first boy to reach the boat. “My name is Stephen,” he cried in perfect English. “There are six of us and we reckon we’ve been here 15 months.”

The boys, once aboard, claimed they were students at a boarding school in Nuku‘alofa, the Tongan capital. Sick of school meals, they had decided to take a fishing boat out one day, only to get caught in a storm. Likely story, Peter thought. Using his two-way radio, he called in to Nuku‘alofa. “I’ve got six kids here,” he told the operator. “Stand by,” came the response. Twenty minutes ticked by. (As Peter tells this part of the story, he gets a little misty-eyed.) Finally, a very tearful operator came on the radio, and said: “You found them! These boys have been given up for dead. Funerals have been held. If it’s them, this is a miracle!”

In the months that followed I tried to reconstruct as precisely as possible what had happened on ‘Ata. Peter’s memory turned out to be excellent. Even at the age of 90, everything he recounted was consistent with my foremost other source, Mano, 15 years old at the time and now pushing 70, who lived just a few hours’ drive from him. The real Lord of the Flies, Mano told us, began in June 1965. The protagonists were six boys – Sione, Stephen, Kolo, David, Luke and Mano – all pupils at a strict Catholic boarding school in Nuku‘alofa. The oldest was 16, the youngest 13, and they had one main thing in common: they were bored witless. So they came up with a plan to escape: to Fiji, some 500 miles away, or even all the way to New Zealand.

There was only one obstacle. None of them owned a boat, so they decided to “borrow” one from Mr Taniela Uhila, a fisherman they all disliked. The boys took little time to prepare for the voyage. Two sacks of bananas, a few coconuts and a small gas burner were all the supplies they

No one noticed the small craft leaving the harbour that evening. Skies were fair; only a mild breeze ruffled the calm sea. But that night the boys made a grave error. They fell asleep. A few hours later they awoke to water crashing down over their heads. It was dark. They hoisted the sail, which the wind promptly tore to shreds. Next to break was the rudder. “We drifted for eight days,” Mano told me. “Without food. Without water.” The boys tried catching fish. They managed to collect some rainwater in hollowed-out coconut shells and shared it equally between them, each taking a sip in the morning and another in the evening.

Then, on the eighth day, they spied a miracle on the horizon. A small island, to be precise. Not a tropical paradise with waving palm trees and sandy beaches, but a hulking mass of rock, jutting up more than a thousand feet out of the ocean. These days, ‘Ata is considered uninhabitable. But “by the time we arrived,” Captain Warner wrote in his memoirs, “the boys had set up a small commune with food garden, hollowed-out tree trunks to store rainwater, a gymnasium with curious weights, a badminton court, chicken pens and a permanent fire, all from handiwork, an old knife blade and much determination.” While the boys in Lord of the Flies come to blows over the fire, those in this real-life version tended their flame so it never went out, for more than a year..." 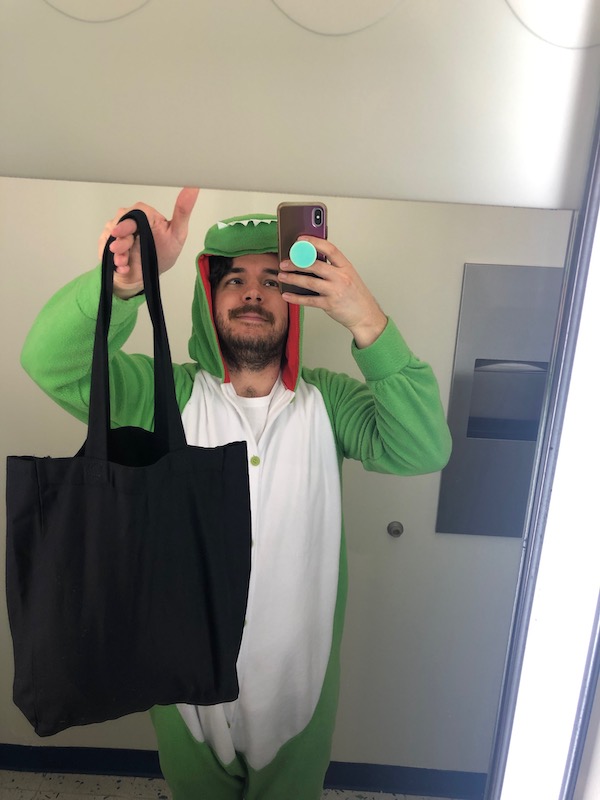 Humankind: A Hopeful History by Rutger Bregman Via Amazon

The Guardian article by Rutger Bregman

The Sons of Sam, tv show

Crime of the Century, tv show

We All Looked Up book by Tommy Wallach

After 5 Years in a terrible administrative role and after 15 horrible interviews and years of being undervalued and underpaid I just accepted my dream job as an Analyst! — Hillary

So I was finishing up my meal prepping and as I was cutting asparagus I went right through my thumb, across the nail and stopping at the bone. Thankfully I stopped when I felt resistance. At the emergency room I realized I was wearing my Mickey Mouse pajama pants paired with my MFM 'Here's The Thing' shirt. The doctor's bandaged me up and I didn't need stitches! And here's the thing...fuck everyone, including my clumsy ass self! — Peachy233

I volunteer at my local cemetery and I pitched a true crime tour to the cemetery staff and they loved the idea! — Sheenawarriorclogger

My Fucking Hooray is that I am 41-years-old and that two of my lifelong dreams came true!  — Emily Rohm