The Beast of Gévaudan

Karen and Georgia cover the Ayahuasca murders and the Beast of Gévaudan.

'A gunshot broke the quiet in the jungle hamlet of Victoria Gracia. There was a commotion outside a cluster of modest wooden shacks on the main dirt road. Then two more gunshots rang out, and 81-year-old Olivia Arevalo Lomas, one of the most renowned shamans in the Peruvian Amazon, lay dead on the ground.

While the locals in Victoria Gracia don’t trust the authorities, someone called them. After a while, the police from the nearby city of Pucallpa were there, marking the scene, collecting evidence, taking names. Grieving villagers stood by, fuming as Arevalo’s body lay in the dirt for hours.

Before the authorities had even started their work, the villagers had fingered a suspect: a British Columbia man named Sebastian Woodroffe.

Soon after the shooting on April 19, 2018, a homemade poster was circulated online, with the words "SE BUSCA" — Spanish for "wanted" — in bold caps at the top of the page. Below were two photos of a gringo male with dark hair and stubble. He was identified as "Sebastian Woodofre [sic], De nacionalidad canadiense."

"Please brothers, help pass this on facebook," the message read. "This is the man who killed our teacher Olivia Arevalo, after making her sing an Icaro. He found her alone, asked her to sing and then killed her. This happened in the Colony of Victoria Gracia, Ucayali, Peru."

In South American Indigenous culture, an icaro is a healing chant. Sung by a curandero, or shaman, it is said the icaro channels medicinal spirits.

"Let's hope they find him," the poster said, offering the familiar incentive: "REWARD!!!"

But the poster was misleading. The suspect wasn't on the run. According to local authorities, the poster was a ruse meant to distract police from the grisly fact that Woodroffe was already dead — lynched by a mob just minutes after Arevalo's killing..."

The Beast of Gévaudan 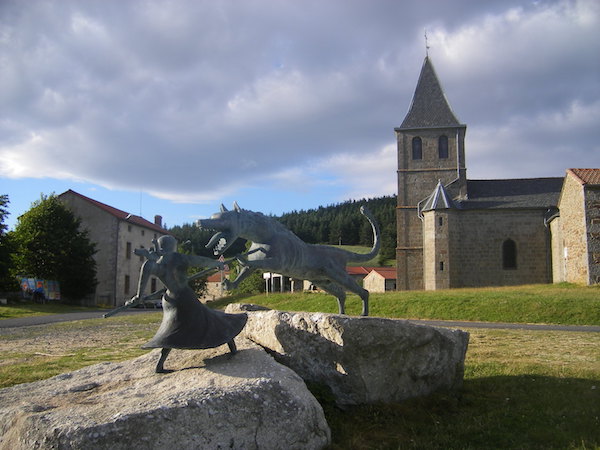 The Beast of Gévaudan Notes:

The Wolf of Chazes by M. François Antoine de Beauterne (via Wikipedia)

Marie-Jeanne Valet Vs. The Beast of Gévaudan (via Wikipedia)

"The Beast of Gévaudan (French: La Bête du Gévaudan) Occitan: La Bèstia de Gavaudan) is the historical name associated with a man-eating animal or animals which terrorised the former province of Gévaudan (consisting of the modern-day département of Lozère and part of Haute-Loire), in the Margeride Mountains of south-central France between 1764 and 1767.[1] The attacks, which covered an area spanning 90 by 80 kilometres (56 by 50 mi), were said to have been committed by one or more beasts with formidable teeth and immense tails, according to contemporary eyewitnesses. Most descriptions from the period identify the beast as a wolf, dog, or wolf-dog hybrid.

Victims were often killed by having their throats torn out. The Kingdom of France used a considerable amount of money and manpower to hunt the animals responsible, including the resources of several nobles, soldiers, royal huntsmen, and civilians. The number of victims differs according to the source. A 1987 study estimated there had been 210 attacks, resulting in 113 deaths and 49 injuries; 98 of the victims killed were partly eaten. Other sources claim the animal or animals killed between 60 and 100 adults and children and injured more than 30. The beast was reported killed several times before the attacks finally stopped..."

— Source: The Beast of Gévaudan Wikipedia

From Embers podcast — Ayahuasca, Colonialism and the Death of a Healer

The Cull of Personality by Kevin Tucker

How About That article by unknown

All That's Interesting by By Aimee Lamoureux