Karen and Georgia cover the Zoot Suit Riots and the 1976 Chowchilla bus kidnapping.

Zoot Suits on Parade (via Wikipedia)

Men in Zoot Suits (via Wikipedia)

Authorities discuss the Zoot Suit Riots, 1943 (via Wikipedia) *not pictured

"The Zoot Suit Riots were a series of conflicts on June 3–8, 1943 in Los Angeles, California, United States, which pitted American servicemen stationed in Southern California against Mexican-American youths who were residents of the city. It was one of the dozen wartime industrial cities that suffered race-related riots in the summer of 1943, along with Mobile, Alabama; Beaumont, Texas; Detroit, Michigan; and New York City.

American servicemen and white Angelenos attacked and stripped children, teenagers, and youths who wore zoot suits, ostensibly because they considered the outfits, which were made of much fabric, to be unpatriotic during World War II. Rationing of fabric and certain foods was required at the time for the war effort. While most of the violence was directed toward Mexican American youth, African American, Italian American, and Filipino American youths who were wearing zoot suits were also attacked.

The Zoot Suit Riots were related to fears and hostilities aroused by the coverage of the Sleepy Lagoon murder trial, following the killing of a young Latino man in what was then an unincorporated commercial area near Los Angeles. The riot appeared to trigger similar attacks that year against Latinos in Chicago, San Diego, Oakland, Evansville, Philadelphia, and New York City. The defiance of zoot suiters became inspirational for Chicanos during the Chicano Movement..." 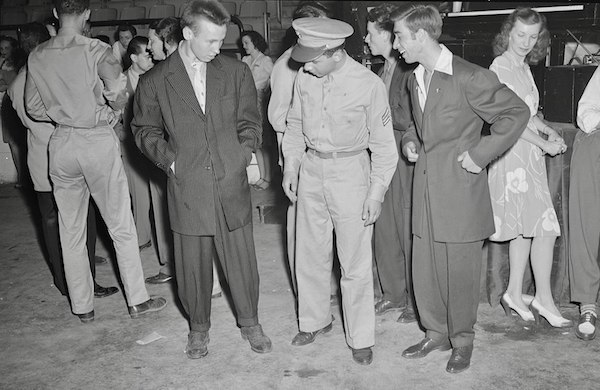 Survivors of the kidnapping (48 Hours via Daily Mail)

"The 1976 Chowchilla kidnapping was the abduction of a school bus driver and 26 children, ages 5 to 14, in Chowchilla, California on July 15, 1976. The three kidnappers imprisoned their victims in a buried box truck within a quarry in Livermore, California, intending to demand a ransom for their return. After about 16 hours underground, the driver and children were able to dig themselves out and escape.

The quarry owner's son, Frederick Newhall Woods IV, and two of his friends, brothers James and Richard Schoenfeld, were arrested and convicted of the crime. By 2015, both Schoenfelds had been paroled, while Woods remains incarcerated as of fall 2019.

On Thursday, July 15, 1976 at around 4 p.m., school bus driver Frank Edward "Ed" Ray was transporting 26 students from the Dairyland Elementary School home from a summer class trip to the Chowchilla fairgrounds swimming pool when a van blocked the road ahead of the bus. Ray stopped the bus and was confronted by three armed men with nylon stockings covering their faces. One of the men held a gun on Ray while another drove the bus; the third man followed in the van.

The kidnappers hid the bus in the Berenda Slough, a shallow branch of the Chowchilla River, where a second van had been stashed. Both vans had the windows in the back painted black and interiors reinforced with paneling. Ray and the children were herded into the two vans at gunpoint and then driven around for 11 hours before eventually being taken to a quarry (37°39′48″N 121°48′29″W) in Livermore, California. There, in the early morning hours of July 16, the kidnappers forced the victims to climb down a ladder into a buried moving truck that they had stocked with a small amount of food and water and a number of mattresses.

Bus driver Ray and the older children eventually stacked the mattresses, enabling some of them to reach the opening at the top of the truck, which had been covered with a heavy sheet of metal and further weighed down with two 100-pound industrial batteries. After hours of effort, Ray and the oldest boy, 14-year-old Michael Marshall, managed to wedge the lid open with a piece of wood and move the batteries; they then dug away the remainder of the debris blocking the entrance. Sixteen hours after they had been forced inside the buried truck, the group emerged and walked to the quarry's guard shack near the Shadow Cliffs East Bay Regional Park..."

The Hundreds article by Brandon Diaz

Murder at the Sleepy Lagoon by Eduardo Obregon Pagan

Woman In A Zoot Suit by by Catherine S. Ramírez

I’ll Be Gone In The Dark, HBO tv show

Becoming Nobody film by Ram Dass

I Said No Gifts with guest Emma Thompson

I Said No Gifts with guest Sasheer Zamata