Live at the Chevalier Theatre in Medford, MA (2018)

The Murder of Mary-Lou Arruda

Karen and Georgia cover the murder of Mary-Lou Arruda and The Great Boston Fire of 1872.

The Story of the Great Fire: Boston, November 9-10, 1872 by Carleton Coffin Charles

The Murder of Mary-Lou Arruda

The Murder of Mary-Lou Arruda Notes:

Photo of Mary-Lou Arruda (via FindAGrave.com)

Car used to kidnap Mary-Lou parked outside home 1978 (via HaroldNews.com)

"On September 8 1978 about 4PM Arruda was last seen riding her bicycle near her home in Raynham Mass. Her bicycle was found around 430PM by the side of the road, next to it was a tire track with an acceleration mark. The tire track showed an abnormal wear pattern, also located close by was a Benson & Hedges cigarette. A number of witnesses came forward reporting seeing a bright green car with a black racing strip. Police obtained a driver's description. At 5PM the boy who found Arruda's bicycle returned it to her parents, who had just finished reporting Arruda missing to the Raynham Police Department. An extensive search was conducted for three days in the area she was last seen On September 9 police had developed photos of the tire tracks found near the bicycle. On September 10 police circulated a wanted poster containing the composite likeness of the driver of the bright green car. On September 13 Police received information on James Kater and a photo. September 19 Kater along with his attorney and wife met with Raynham police. Police notified his appearance matched that of the wanted poster. In addition he smoke Benson & Hedges cigarettes and drove a bright green 1976 Opel with a black racing strip. His right front tire had excessive wear, photos were taken. James Kater from Brockton Mass was a donut maker and was on probation for an incident in 1969. Kater plead guilty to assault with intent to rape, assault & battery with a dangerous weapon and kidnapping. All of the charges were from a 1968 kidnapping and attack on other young girl from Andover Mass.

tree in the Freetown-Fall River State Forest. Her body was discovered by a dirt bike rider. The cause of death was ruled by the medical examiner as strangulation by ligature or positional asphyxia. The medical examiner determined she was alive and in a standing position when she was tied to the tree, but once she became unconscious the weight of her head against the ligature around her neck caused her to suffocate. It was determined she died the same day she went missing. She was later buried in the St. Joseph's Cemetery in Raynham Mass.

At the trial, James Kater testified on his own behalf and acknowledged his guilt in the 1968 incident. He stated was rebuilding his life since his release from prison in January 1976. Kater denied any involvement with the Arruda case.

In 1979 Kater was convicted of 1st degree murder and sentenced to life in prison without the possibility of parole. The Massachusetts Supreme Judicial Court overturned the verdict, and he was convicted again in 1986. The verdict once again was overturned. He was retried in 1992, ending in a mistrial. He was retried in 1996 and was finally convicted. Kater is currently serving his sentence in a federal prison at Lompoc, California where he was moved for his safety..." 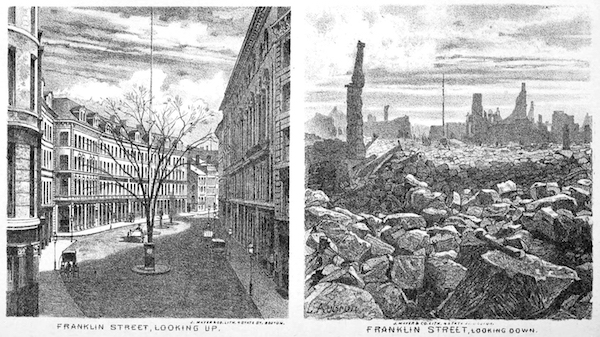 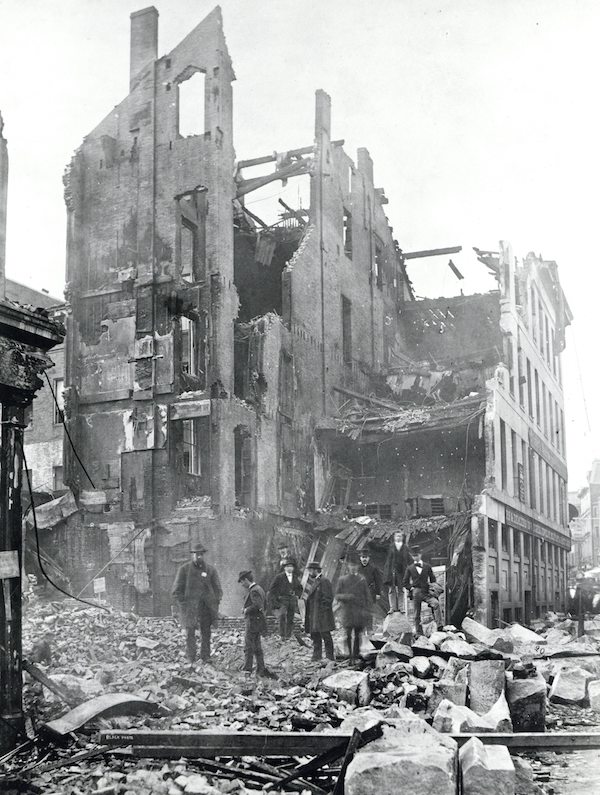 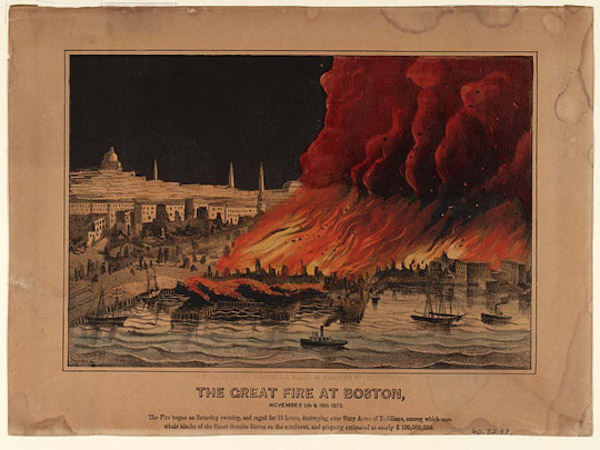 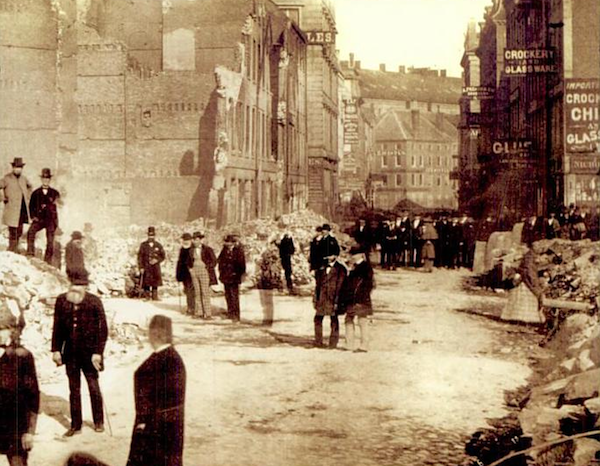 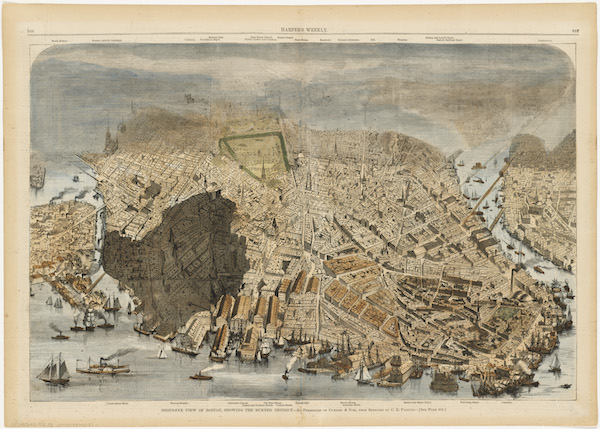 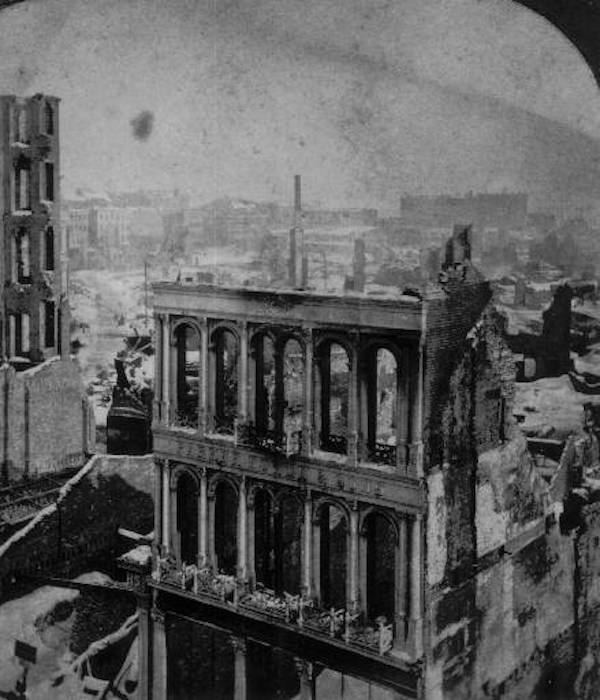 View of Franklin St. in Boston 1872 (via Wikipedia)

Aftermath of the fire (via Wikipedia)

Downtown ruins after fire (via Wikipedia)

Other images (not pictured):

Onlookers amongst the rubble (via NewEnglandHistoricalSociety.com)

"The Great Boston Fire of 1872 was Boston's largest fire, and still ranks as one of the most costly fire-related property losses in American history. The conflagration began at 7:20 p.m. on November 9, 1872, in the basement of a commercial warehouse at 83–87 Summer Street. The fire was finally contained 12 hours later, after it had consumed about 65 acres (26 ha) of Boston's downtown, 776 buildings and much of the financial district, and caused $73.5 million in damage (equivalent to $1.411 billion in 2018). The destruction to the buildings was valued at $13.5 million and the personal property loss was valued at $60 million. Despite these devastations, only thirteen people died in the inferno, including two Boston firemen.

Experts have deduced that the fire began in the basement of a warehouse on the corner Kingston Street and Summer Street, at approximately 83-85 Summer Street. In this particular area, most of the buildings were dedicated to retail or used as warehouses. The warehouse that first caught fire housed dry goods. From the basement, the flames spread to the wooden elevator shaft in the center of the building and moved up the floors, fueled by the flammable fabrics in storage. Finally, the building’s wooden mansard roof caught on fire and the flames were able to spread from rooftop to rooftop down the street. The heat was so powerful that granite buildings exploded. The fire spread through most of Boston's financial district which became known as the "burnt district." The glow of the fire was noted in ships' logs by sailors off the coast of Maine.

7 pm, November 9: the fire begins in the basement of a warehouse

8 pm, November 9: all twenty-one of Boston's fire engines are at the scene of the fire

10 pm, November 9: the fire spread to a three block radius

12 am, November 10: the fire spread to a five block radius

4 am, November 10: the fire spread to the waterfront, destroying wharves and docked boats

6 am, November 10: the fire reached Washington Street and spread through the center of downtown

midday, November 10: the fire is stopped and contained before it destroys Old South Meeting House

Citizens and firefighters alike worked to stop the fire. Along Washington Street, wet blankets and rugs were said to have been used to cover buildings to prevent the fire from spreading to the Old South Meeting House, the church in which the Boston Tea Party was planned. Some citizens and firefighters climbed to the roof of the meeting house to put out sparks. Most accounts of the fire credit the Kearsarge Engine 3 of Portsmouth, New Hampshire, with saving Old South Meeting House. The efforts to save this historic landmark finally halted the fire at the corner of Washington and Milk Streets, around midday on November 10..."