Live at the Cobb Energy Performing Arts Centre in Atlanta (2018)

The Curse of Lake Lanier

Karen and Georgia cover the curse of Lake Lanier and Anjette Donovan Lyles.

The Curse of Lake Lanier

The Curse of Lake Lanier Notes:

Submerged building (via Europics/CEN via DailyMail.com)

"In 2011, this menacing reputation for accidents and deaths began to get more public attention when there were a total of 17 deaths on Lake Lanier, many due to freak accidents. In 2012 the trend continued when a quick succession of violent deaths and horrific injuries occurred here which made national news. The first of this wave of deaths happened on June 18, 2012, when 9-year-old Jake Prince and his brother Griffin, 13, were riding a pontoon out on the lake and were struck and killed by a speeding boat driven by a Johns Creek business owner named Paul J Bennett, 44. Mere weeks after this tragic accident, on July 9, 11-year-old Kile Glover, who happened to be the son of the popular pop star Usher’s ex-wife, Tameka Foster, was struck while riding an inner tube by a family acquaintance riding a jet ski and rendered braindead. Although doctors struggled to save his life, he died two weeks later on July 21 and was taken off life support. A 15-year old friend of the boy’s was also seriously injured in the same incident, but ultimately recovered. These tragic accidents took the media by storm, and before long Lake Lanier was being deemed “cursed” and “a death trap” by the news and social media sites such as Twitter, with many people insisting that it was an evil, vile place that was best avoided.

While these were perhaps the most high profile deaths to occur on Lake Lanier, these sorts of accidents and drownings have been happening with unsettling frequency since the lake was first opened to the public. While a lot of people have been quick to call the lake cursed, one of the more likely reasons for these incidents is probably due to the area’s rapid rise as a popular place to visit. Besides being a water source and hydroelectric plant for Atlanta and the surrounding areas, from around 1962, Lake Lanier has become a popular recreational area complete with hotels, full-service boating marinas, restaurants, campgrounds, stables, beaches, a golf course, and even a full water park. People of all ages come here for boating, swimming, fishing, camping, and other outdoor activities, to the tune of around 8 million visitors a year. Adding to the dangers already inherent with so many droves of people converging on the lake, often with a good amount of alcohol involved, there are also very few regulations for operating boats or motorized water craft and those that are in place are weakly enforced. With so many people driving around in boats and swimming, in many cases under the influence of alcohol, there are bound to be quite a few accidents. Yet nevertheless, there are still those who insist that even considering these circumstances the number of deaths, weird accidents, and injuries at Lake Lanier is unusually high, and believe the lake is truly cursed, haunted, or both..." 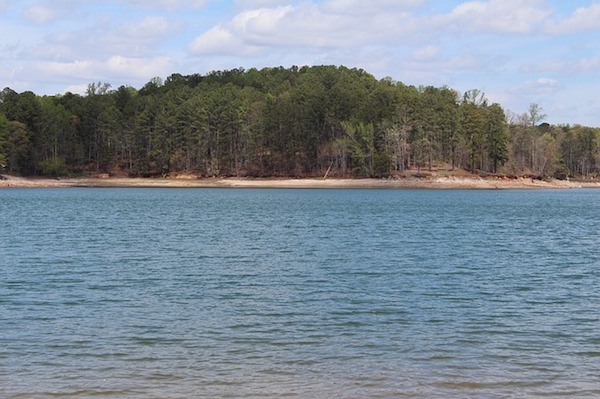 "Lyles, Anjette Donovan (23 Aug. 1925-4 Dec. 1977), restaurateur and multiple murderer, was born in Macon, Georgia, the only daughter of Jetta Watkins and William Donovan, who owned and operated a produce company. While Lyles was an unremarkable student, she was pretty and possessed a charming personality that enabled her to bend people to her will. Even as a child, she usually got what she wanted.

In 1947 she married Ben F. Lyles Jr., son of Julia and Ben F. Lyles Sr. Her husband owned Lyles Restaurant in downtown Macon, the business begun by his late father. The couple had two daughters, Marcia, born in 1948, and Carla, born in 1951. Anjette and Ben operated the restaurant together, and she was especially successful in dealing with customers. However, in June of 1951, Ben Lyles Jr. sold the restaurant due to his failing health. He made this move without consulting his wife and she never forgave him. As his health worsened, his attending doctors at Macon Hospital were uncertain as to the exact cause of his illness; when he died on 25 January 1952, they finally decided upon encephalitis as the cause of death.

Now a widow with two small children, Lyles and her daughters moved into her parents' home. She found work in another local restaurant and saved as much money as she could while learning the business. In April of 1955 she bought back the restaurant she believed her husband had stolen from her and renamed it Anjette's. While the food was typical Southern fare, people flocked to her eatery, attracted by her friendliness and outgoing personality. Anjette's quickly became the most popular restaurant in town. Her clientele included businessmen, judges, attorneys, and civic leaders. Lyles was a headstrong woman who often stretched the boundaries of acceptable behavior in the small Southern town. She drove flashy cars and dressed in the newest styles. Perhaps because of her striking good looks and flirtatious manner, Lyles's name was often linked in rumor to various men in the community, but there was no concrete proof of these liaisons.

In the late spring of 1955 Lyles began seeing Joe Neal Gabbert, a pilot for Capitol Airways. She accompanied Gabbert on a trip to Texas and New Mexico later that year, and the two surprised their friends and families by marrying in Carlsbad, New Mexico, on 24 June 1955. When they returned to Macon, Gabbert moved into the Donovan household. Four months later, he entered Parkview Hospital for minor surgery on his wrist, but the next day, he developed a spiking fever and a painful skin rash that spread over his entire body. The doctors weren't able to locate the cause of his illness and Gabbert never recovered. He was eventually transferred to the Veterans Hospital in Dublin, Georgia, where he died on 2 December 1955.

Soon after her second husband's death, Lyles appeared in Bibb County Superior Court to have her name changed from Gabbert back to Lyles. With the money she received from Gabbert's life insurance, Lyles bought a new car and a house. She also sparked disapproving gossip when, only a few months after her husband's death, she began dating another Capitol Airways pilot.

Soon after Lyles acquired her new house, her first mother-in-law, Julia Lyles, moved in with her. The elder Mrs. Lyles was lonely and wanted to be closer to her grandchildren. Mrs. Lyles also spent much of every day at the restaurant she and her husband had owned and which now belonged to her daughter-in-law. Going through some of the older woman's possessions, Lyles found a bankbook, which revealed that her mother-in-law possessed considerable wealth. She began pestering Mrs. Lyles to make a will, but Mrs. Lyles refused to do so.

Lyles was superstitious. She frequented fortunetellers and root doctors and tried to cast her own spells. She often pressed her maid Carmen Howard and her mother-in-law to participate in these ceremonies. And it wasn't uncommon for the restaurant staff to find her burning candles in the kitchen and speaking to the flames.

When Julia Lyles became ill in August of 1957, her daughter-in-law stayed with and cared for her during her month-long hospital stay, earning admiration for her devotion. She often brought Mrs. Lyles's favorite foods to her from the restaurant and fed her. Mrs. Lyles suffered from nausea and severe edema, but the doctors never isolated the cause of her symptoms. She died on 29 September 1957 and was buried beside her husband and son. A week later, Lyles produced what she claimed was her mother-in-law's will in which much of her estate was left to Anjette Lyles and her daughters. The will was probated soon afterward.

It wasn't until Marcia grew ill in the late winter of 1958 that townsfolk became suspicious of the deaths of those people closest to Anjette Lyles. When, after a long hospital stay, Marcia died on 4 April 1958, an autopsy was performed on the child's body and arsenic was found in her system. When the bodies of Ben F. Lyles Jr., Joe Neal Gabbert, and Julia Lyles were exhumed, it was determined that all three had died from arsenic poisoning. A search of Lyles's house turned up several boxes of ant poison, containing arsenic, along with what was referred to as "voodoo paraphernalia"-candles, written spells, potions, powders, and roots.

On 6 May 1958, Lyles was arrested and charged with four counts of murder. The case became an immediate sensation. Her trial, held the first week of October of 1958, attracted worldwide attention. Huge crowds stood outside the courtroom, hoping to get a glimpse of the defendant whom the newspapers referred to as the "glamorous, platinum-haired widow." Lyles was convicted and sentenced to death for her crimes..."