The Case of Randy Mock

Karen and Georgia cover the case of Randy Mock and the Seattle Cyanide Poisonings.

The Case of Randy Mock

The Case of Randy Mock Notes:

"A love-sick pilot who buzzed his ex-girlfriend's neighborhood for nearly two hours was over-whelmed with emotion but low on fuel - and crashed into her living room when the plane's tank ran dry.

"I told him he wasn't welcome in my home," said the woman's father as he surveyed a living room filled with shattered glass and bits of aluminum fuselage on Wednesday. "I guess this is how he got in."The woman, Donna Lorenz, and her parents fled the house before the crash, which left pilot Randy Mock with serious skull fractures and facial injuries.

Police evacuated about 100 people to a shopping mall parking lot as Mock, 30, swooped and dipped a Cessna two-seater in the predawn flight. He stalled the plane several times and clipped the top branches of a tree.

A witness, Don Rudko, said Mock casually flicked a cigarette butt out his window a few seconds before crashing.

"I could see the red spark as he tossed it out," said Rudko. "I thought this guy must be Cool Hand Luke. Here he's going to kill himself and he flicks a cigarette out the window."

"Every time it came by, I'd drive to a different part of the lot to get out of its way. It was unreal, like a dream, only it was real," said Yolande Rovere, a resident.

Police negotiators went to the control tower of the municipal airport to try to talk Mock down. He demanded to speak to Lorenz, who refused.

"I'm almost out of gas, man," he told police, who recorded part of the communication. "You know nobody takes me seriously. There's a lot of people asleep down there and it'd be a disaster if I ran out of gas where I am now."

His engine sputtered, then stalled and he glided neatly into the home's living-room window.

"It was one of those love things," said Lorenz's brother.

Mock made headlines in 1988 when he was granted a temporary injunction preventing another woman, an 18-year-old former girlfriend, from having an abortion. He argued he and the woman had agreed to have a family and said he wanted to raise the child.

A judge refused to extend the 48-hour injunction and the woman went ahead with the abortion.

In June, Mock was laid off as an aircraft refueler at Edmonton's International Airport..." 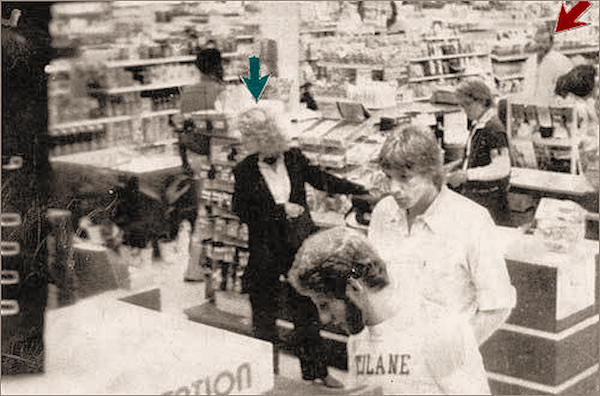 "The Chicago Tylenol Murders were a series of poisoning deaths resulting from drug tampering in the Chicago metropolitan area in 1982. The victims had all taken Tylenol-branded acetaminophen capsules that had been laced with potassium cyanide. A total of seven people died in the original poisonings, with several more deaths in subsequent copycat crimes.

These incidents led to reforms in the packaging of over-the-counter substances and to federal anti-tampering laws. The actions of Johnson & Johnson to reduce deaths and warn the public of poisoning risks have been widely praised as an exemplary public relations response to such a crisis.

No suspect was ever charged or convicted of the poisonings. New York City resident James William Lewis was considered the prime suspect, and was convicted of extortion for sending a letter to Johnson & Johnson that took credit for the deaths and demanded $1 million to stop them.

During the initial investigations, a man named James William Lewis sent a letter to Johnson & Johnson demanding $1 million to stop the cyanide-induced murders. Police were unable to link him with the crimes, as he and his wife were living in New York City at the time. He was convicted of extortion, served 13 years of a 20-year sentence, and was released in 1995 on parole. WCVB Channel 5 of Boston reported that court documents, released in early 2009, "show Department of Justice investigators concluded Lewis was responsible for the poisonings, despite the fact that they did not have enough evidence to charge him". Lewis has consistently denied all responsibility for the poisonings for several years.

A second man, Roger Arnold, was investigated and cleared of the killings. He had a nervous breakdown due to the media attention, which he blamed on Marty Sinclair, a bar owner. In the summer of 1983, Arnold shot and killed John Stanisha, whom he mistook for Sinclair. Stanisha was an unrelated man who did not know Arnold. Arnold was convicted in January 1984 and served 15 years of a 30-year sentence for second-degree murder. He died in June 2008.

In early 1983, at the FBI's request, Chicago Tribune columnist Bob Greene published the address and grave location of the first and youngest victim, Mary Kellerman. The story, written with the Kellerman family's consent, was proposed by FBI criminal analyst John Douglas on the theory that the perpetrator might visit the house or gravesite if he were made aware of their locations. Both sites were kept under 24-hour surveillance for several months, but the killer did not surface.

Laurie Dann, who poisoned and shot people in a May 1988 rampage in and around Winnetka, Illinois, was briefly considered as a suspect, but no direct connection was found.

In early January 2009, Illinois authorities renewed the investigation. Federal agents searched the home of Lewis in Cambridge, Massachusetts, and seized a number of items. In Chicago, an FBI spokesman declined to comment but said "we'll have something to release later possibly". Law enforcement officials have received a number of tips related to the case coinciding with its anniversary. In a written statement,[14] the FBI explained,

This review was prompted, in part, by the recent 25th anniversary of this crime and the resulting publicity. Further, given the many recent advances in forensic technology, it was only natural that a second look be taken at the case and recovered evidence.

In January 2010, both Lewis and his wife submitted DNA samples and fingerprints to authorities. Lewis stated "if the FBI plays it fair, I have nothing to worry about".

On May 19, 2011, the FBI requested DNA samples from "Unabomber" Ted Kaczynski in connection to the Tylenol murders. Kaczynski denied having ever possessed potassium cyanide. The first four Unabomber crimes happened in Chicago and its suburbs from 1978 to 1980, and Kaczynski's parents had a suburban Chicago home in Lombard, Illinois, in 1982, where he stayed occasionally.

A surveillance photo of Paula Price purchasing cyanide-tampered Tylenol at a Walgreen's on 1601 North Wells St. has been released by the Chicago Police Department. Police believe that a bearded man seen just feet behind Price may be the killer.

Three more deaths occurred in 1986 from tampered gelatin capsules. A woman died in Yonkers, New York, after ingesting "Extra-Strength Tylenol capsules laced with cyanide". Excedrin capsules in Washington state were tampered with, resulting in the deaths of Susan Snow and Bruce Nickell from cyanide poisoning and the eventual arrest and conviction of Nickell's wife, Stella, of crimes connected to both deaths. That same year, Procter & Gamble's Encaprin was recalled after a spiking hoax in Chicago and Detroit that resulted in a precipitous sales drop and a withdrawal of the pain reliever from the market.

In 1986 a University of Texas student, Kenneth Faries, was found dead in his apartment after succumbing to cyanide poisoning. Tampered Anacin capsules were determined to be the source of the cyanide found in his body. His death was ruled as a homicide on May 30th, 1986.

Johnson & Johnson received positive coverage for its handling of the crisis; for example, an article in The Washington Post said, "Johnson & Johnson has effectively demonstrated how a major business ought to handle a disaster". The article further stated that "this is no Three Mile Island accident in which the company's response did more damage than the original incident", and applauded the company for being honest with the public. In addition to issuing the recall, the company established relations with the Chicago Police Department, the FBI, and the Food and Drug Administration. This way it could have a part in searching for the person who laced the capsules and they could help prevent further tampering. While at the time of the scare the company's market share collapsed from thirty-five percent to eight percent, it rebounded in less than a year, a move credited to the company's prompt and aggressive reaction. In November, it reintroduced capsules but in a new, triple-sealed package, coupled with heavy price promotions and within several years, Tylenol had the highest market share for the over-the-counter analgesic in the U.S.

The 1982 incident inspired the pharmaceutical, food, and consumer product industries to develop tamper-resistant packaging, such as induction seals and improved quality control methods. Moreover, product tampering was made a federal crime. The new laws resulted in Stella Nickell's conviction in the Excedrin tampering case, for which she was sentenced to ninety years in prison.

Additionally, the incident prompted the pharmaceutical industry to move away from capsules, which were easy to contaminate as a foreign substance could be placed inside without obvious signs of tampering. Within the year, the FDA introduced more stringent regulations to avoid product tampering. This led to the eventual replacement of the capsule with the solid "caplet", a tablet made in the shape of a capsule, as a drug delivery form and with the addition of tamper-evident safety-seals to bottles of many sorts..."

Please go watch The Curious Creations of Christine Mcconnell on Netflix, it is like Tim Burton meets Martha Stewart and it was filmed at Jim Henson studios. It’s also just such a cute, fun show and Christine is lovely. If you like cooking, crafts with a macabre twist I highly recommend it.

Tales from the Tour Bus has started again, it’s my judges series on Cinemax and this season their doing the story of Funk music. The first episode is all about George Clinton and the stories they tell are just so good and you’re like “this is what it’s all about.” I’m just super glad it’s on again because it’s one of my favorites.