The Murder of Angela Samota

The Murder of Angela Samota

The Murder of Angela Samota Notes:

"The murder of Angela Samota occurred in October 1984, when she was attacked while in her apartment, raped, and killed. The case remained unsolved until DNA evidence surfaced in the 2000s and charges were brought against a formerly convicted rapist, who was subsequently tried and received the death penalty.

Angela "Angie" Samota was born on 19 September 1964, in Pennsylvania. She enrolled at the Southern Methodist University in Texas to study computer science and electrical engineering.

On the night of 12 October 1984, Samota and two friends, one male and one female, went on the town to the State Fair of Texas. Samota's boyfriend did not join them, because, according to the police report, he was working in construction and had to get up early the next morning. Participating in the night's festivities were also fans of the University of Texas football team that was to face the University of Oklahoma for the annual Red River Showdown. The three friends went to the Rio Room dance club and stayed there until about 1 am. She drove her friends to their homes, went by her boyfriend's apartment to say goodnight, and then went to her place.

Not long after she got home, her boyfriend called the police to report he had received a phone call from Samota that was disconnected. The apartment manager let in the police and they discovered the woman's dead and naked body on the bedroom bed. The autopsy showed that the victim had been raped and then repeatedly stabbed, dying from wounds to her heart.

For a long period of time, the police reportedly suspected an architect who was 23 years old at the time and living in a Lower Greenville apartment. He was the man who had gone out with Samota and another girl the night of the murder. The victim’s at-the-time boyfriend was also reportedly a suspect.

The case remained unsolved until 2008.

In 2006, then-Dallas police detective Linda Crum, tasked with the case, used the DNA evidence from blood, semen, and fingernail samples to try and find a match among persons with a criminal record. In 2008, the results pointed to Donald Bess who, at the time of Samota's murder, was on parole while serving a 25-year sentence.

Sheila Wysocki, who went to SMU and was a roommate of Samota, subsequently claimed that the case was re-opened because she kept "badgering" the police until "they were so sick and tired of" her that they assigned detective Crum to re-examine it. She credits the fact that she became a licensed private investigator to her desire to assist in solving Samota's murder. Wysocki has further claimed that the police initially had stated the rape kit collected at the crime scene had been lost "in the [Dallas] floods.

During the 2010 trial's punishment phase, women witnesses testified that they too had been raped by Bess. The defendant's ex-wife testified that he abused her and their child during their marriage. They had wed in 1969 and divorced three years later.

On the basis of the DNA match, Bess was found guilty by the jury and, on 8 June 2010, received the death sentence. On 6 March 2013, the appeal filed by Bess was rejected and the judgement of the trial court was affirmed. On 13 August 2013, a certiorari petition was filed to the U.S. Supreme Court, and denied on 13 January 2014.

Samota's body is buried in the Llano Cemetery, Amarillo, Texas. Donald Bess remains on death row in Polunsky prison with no execution date set. Wysocki lives in Tennessee and is still a practicing private investigator..." 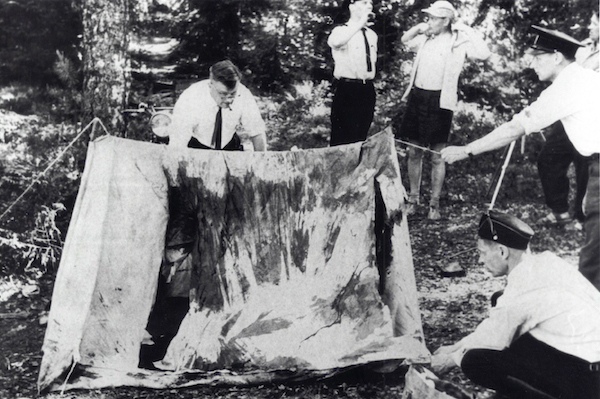 Tent being investigated immediately after the murders from Wikipedia Commons

Composite Sketch of the killer from a description given by Gunderson while under hypnosis from ScreamFestLA.com

"The Bodominjärvi Murders is one of the most infamous unsolved homicide cases in Finnish criminal history. On June 5, 1960, at Bodom Lake, 15-year-old females, Maila Irmeli Björklund and Anja Tuulikki Mäki, and 18-year-old male, Seppo Antero Boisman, were killed while sleeping inside a tent by stabbing and blunt force trauma to their heads. The fourth youth, then 18-years-old, Nils Wilhelm Gustafsson, was found outside of the tent badly injured. Despite extensive investigations, the perpetrator was never identified, and various theories on the killer's identity have been presented over the years. Gustafsson was unexpectedly arrested on suspicion of murder in 2004, but he was released the following year. The identity of Bodominjärvi's murderer has not been discovered.

On Saturday, June 4, 1960, four Finnish teenagers had decided to camp along the shore of Lake Bodom (Finnish: Bodominjärvi, Swedish: Bodom träsk), near the city of Espoo's Oittaa Manor. Maila Irmeli Björklund and Anja Tuulikki Mäki were fifteen years old at the time; accompanying them were their eighteen-year-old boyfriends, Seppo Antero Boisman and Nils Wilhelm Gustafsson.

Sometime between 4:00 AM and 6:00 AM (EET) during the early morning hours of Sunday, June 5, 1960, Mäki, Björklund and Boisman were all stabbed and bludgeoned to death by an unknown assailant. Gustafsson, the only survivor of the massacre, sustained a concussion, fractures to the jaw and facial bones and bruises to the face, but lived. He stated afterwards that he had seen a glimpse of an attacker clothed in black and bright red coming for them.

At about 6:00 AM, a number of boys birdwatching some distance away had reportedly seen the tent collapsed and a blonde man walking away from the site. The bodies of the victims were discovered at about 11:00 AM by a carpenter named Risto Sirén. He alerted the police, who arrived on the scene at noon.

The killer had not injured the victims from inside the tent, but instead had attacked the occupants from outside with a knife and an unidentified blunt instrument through the sides of the tent. The murder weapons have never been located. The killer had taken several items which detectives found puzzling, including the keys to the victims' motorcycles, which themselves had been left behind. Gustafsson's shoes were later discovered partially-hidden approximately 500 meters from the murder site. The police did not cordon off the site nor record the details of the scene (later seen as a major error) and almost immediately allowed a crowd of police officers and other people to trample around and disturb the evidence. The mistake was further exacerbated by calling in soldiers to assist with the search around the lake for the missing items, several of which were never found.

Björklund, Gustafsson's girlfriend, was found undressed from the waist down and was lying on top of the tent, and had suffered the most injuries out of all of the victims. She was stabbed multiple times after her death, whilst the other two teenagers were slain with less brutality. Gustafsson was also found lying on the top of the tent.

There have been numerous suspects during the investigation of Lake Bodom murders, but these suspects are the most notable.

Many local people suspected Karl Valdemar Gyllström, a kiosk keeper from Oittaa known to have been hostile towards campers. Police found no hard evidence to link him to the actual murders. They were skeptical of supposed confessions he was said to have made because they considered him disturbed. He drowned in Lake Bodom in 1969, most likely by suicide. The people in the town knew Gyllström was violent, cut down tents, threw rocks at people who came to his street, and some have later said that it was Gyllström they saw coming back from the murder scene but were too afraid to call the police about him. The police never did any DNA tests from Gyllström and it is now too late, but a book released in 2006 brings up the theory in detail. The book also claims that the police almost immediately ignored much more evidence that was previously unknown to the public because of language barriers, among other things.

Most public suspicion focused on Hans Assmann, who lived several kilometers from the shore of Lake Bodom. A series of popular books promulgated a theory of Assmann committing the Bodom killings, and other murders. It was not taken seriously by the police, as Assman had an alibi for the night of the Bodom murders (and was said to have been in Germany during the time of another murder). In the morning of June 6th 1960 he had however showed up at a hospital in Helsinki with bloody clothes.

In late March 2004, almost 44 years after the event, Gustafsson (not a suspect in the case as far as the public knew) was arrested. In early 2005, the Finnish National Bureau of Investigation declared the case was solved based on new forensic analysis. According to the statement, Gustafsson had been drunk and excluded from the tent when he attacked the other boy, getting his jaw broken in a fight which escalated into him committing three murders.

The trial started on August 4, 2005. Gustafsson's defense lawyer argued that the murders were the work of one or more outsiders and that Gustafsson would have been incapable of killing three people given the extent of his injuries. It had always been known that the shoes worn by the killer and left by him 500 yards away belonged to Gustafsson, who was found barefoot. The significance of modern DNA analysis for the prosecution was it showed that the three murdered victims' blood was on the shoes, but Gustafsson's was completely absent. The prosecution said it followed that Gustafsson must have been stabbed at a different time to the attack on the murdered victims, and that the only explanation of this was that Gustafsson's knife wounds had been self-inflicted after he committed the murders and took his shoes off. The prosecution attempted to bolster their case with an identification by two birdwatchers of Gustafsson as the man they observed at the scene on the crime, and an assertion that while in custody he had made an incriminating remark. On October 7, 2005, Gustafsson was acquitted of all charges. The State of Finland paid him €44,900 for the mental suffering caused by the long remand time, but he was refused permission to sue Finnish newspapers for defamation..."

Murderinos Charlotte + Dave started a fundraiser on Facebook group called “Reunite An Immigrate with Their Child” for RAICES, to do just that. Even if it’s $5 fucking dollars it’s a good thing to do.

I went to therapy this morning, and it was an especially good sesh. For those who feel like they’ve been going to therapy for a while and have plateaued I want to say go to therapy every and show up every week trying to learn something about yourself. Keep on putting in the work. We're proud of you.